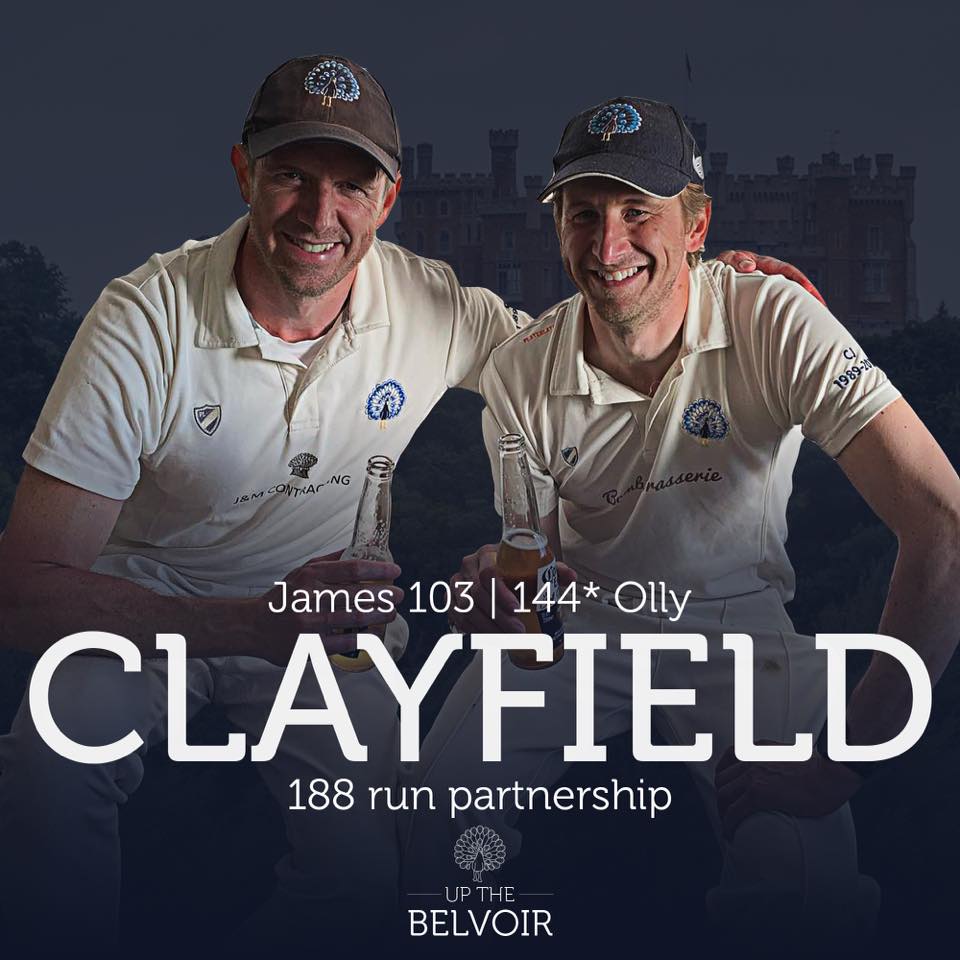 Finally, the cricket season has begun. After weeks of rain and cold weather we were greeted by glorious sunshine at the BCG. Captain Tebbutt lost the toss and the Belvoir 2nds were asked to bat first by visiting Beeston & Toton Sycamore CC 1st team. Would this prove to be B&TS’s first mistake? Short answer – yes!
The Belvoir 2nds’ well-oiled batting lineup had been waiting for a chance to bat first on a sunny day. Hubbard didn’t get this memo though, skewing a drive to point, on 17-1. Any optimism from the away side would slowly disintegrate as James and Olly Clayfield put on a batting masterclass for all to see. The Indians used to say “on the off side, first there is God and then, Ganguly”. I’d add the Clayfrields next to that as they punched and placed the ball all around the ground at will.
James, with a long stride, looked impenetrable in defence and decisive in attack, his timing and shot selections were impeccable. Olly appeared reminiscent of a modern day Wally Hammond, cutting and driving the ball with incredible grace and timing. I doubt anyone can claim to witness a more elegant player .
As they both passed 50 the whole ground could sense they were just getting started. Both brothers shifting through the gears effortlessly, giving no chances to the bowling side. Now the race was on to The Hundred but there were no nervous nineties from either, experience and ability meant that they would never give such a golden opportunity away. James reached the ton first with a beautifully timed four and celebrated to rapturous applause from all attending the ground. The next ball was brilliantly caught on the cover boundary but James could be immensely proud of his innings.
This brought George Tebbutt to the crease after watching the Clayfields put on a triumphant partnership (188)! His first job, to congratulate Olly on a sublime hundred. Again the ground rising in admiration for a brilliant innings, but Olly wasn’t finished there. With support from Tebbutt (23) and Jacob Marshall-Taylor (20 NO) the Belvoir batting lineup had set up for carnage in the last 5 overs, as Olly hit the boundary at will and JMT cleverly attacked and rotated the strike. Belvoir finished on 311-3!

In reply the exciting Sammy Hardy was in no mood to let a good position slip. Pacey and accurate, the youngster soon removed the off stump of skipper Paul Walsh. Beeston were soon in deep trouble as Ben Robinson picked up two wickets at the other end. Surely at 30-3 chasing over 7 an over the game was over right? Wrong! Beeston number 4 Mark Walsh unleashed a brilliant counter attack, dispatching the ball to all parts as Belvoir’s young attack had to hold on. Through brave bowling and excellent fielding Belvoir continued to pick up wickets at the other end. Chas Hubbard like a man reborn sliding and almost running out the Beeston star man. Sammy Hardy went one better with a direct hit from long off as belvoir kept taking their chances. Eventually Walsh holed out for 98 to a sensational diving catch in the deep from 15 year old Jack Butler off the excellent skipper George Tebbut. Ollie Poole and Dan Wade both bowled accurately before Sammy Hardy returned to polish off the tail (11 -4-29-3). A brilliant all round performance in the sunshine at the BCG as the home side won by 127 runs.

Certainly a day to remember for the Clayfield family, and with lots of them at the ground to see the brilliance for themselves. They will be able to reminisce at family gatherings for many years to come!